Markets clearly want to believe in a robust recovery, and to some extent we agree the skies have cleared. Still, we would love to see actual data match this rebound in sentiment. We continue to think it is not going to be easy for global growth to exceed potential this year, even if some signs of improvement are appearing. China – as often – will be pivotal.
The global dataflow has not changed much over the last few months. In most regions manufacturing continues to struggle – even if it has probably stopped deteriorating – while services remain resilient, supported by a robust labour market. The dominant view is that the good news on trade war, coupled with the lagged effect of the monetary stimulus provided last year will quickly trigger a turnaround of global trade and thus of manufacturing activity. The very latest data from China is encouraging from this point of view. GDP growth has stabilised at 6% in Q3 and Q4, and manufacturing surveys have rebounded in the last two months.

Still, two elements could cap this rebound. First, the domestic financial imbalances still need to be addressed. Second, a side-effect of the phase one deal signed with the US will be to hasten China’s economic and financial opening, forcing an acceleration in the reforms. In the medium run this is good news for the world economy – slower but higher quality growth in second largest market of the world would be a net positive – but the transition may be a bit painful.

In the US, there is no reason to stop trusting in the consumer’s capacity to keep economic growth decent. The market’s immediate response to the December payroll was negative, but the recent trend has been resilient, exceeding the levels seen last spring. It’s on investment that we remain cautious. Profitability is declining and the presidential elections remain very open, with very polarised platforms being mooted, which could fuel some wait and see attitude (Exhibit 1). 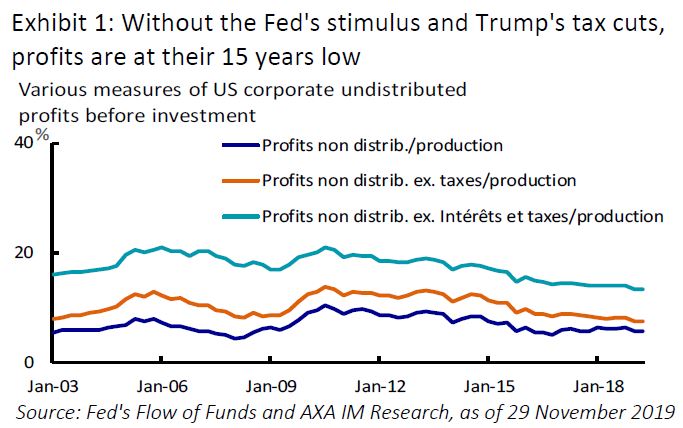 In the UK, the Bank of England (BoE) seems to take the recent signs of slowdown seriously – for our part we have revised our forecast for Q4 GDP growth down to zero from 0.2% – and we now expect the Monetary Policy Committee (MPC) to opt for a pre-emptive rate cut at the end of the month. This may spur more activity in the usual interest-rate sensitive sectors such as housing – and the latest surveys are pointing at some tentative revival there – but for the UK as well we are cautious on corporate investment. The elections have brought some clarification, but the commentariat is re-focusing in the thorny negotiations towards the Free Trade Agreement, which is not going to spur animal spirits in the business sector.

In the Euro area, Germany remains the point of focus. Those who like their glass half-full will focus on second derivatives and the fact that manufacturing is contracting at a slower pace in mid-2019, but if global investment remains constrained, re-accelerating fast will be difficult

The world economy is breathing better, but it is not yet ready for a sprint. Yet markets have sprinted out of the blocks so far in the new year. Short-term performance has been led by the most cyclical assets – Japanese, US and emerging market equities – reflecting the renewed confidence in the global cycle. These have been closely followed by higher yielding debt assets in terms of total return performance, continuing the trend that began back in October. It is very much a risk-on start to 2020 driven by the expectation of some cyclical growth pick-up and that this will be reflected in a resumption of corporate earnings growth. The fact that the hurdle for central banks to raise interest rates is so high at this juncture means that rate risks are not on the investment horizon.

Valuations could be a concern at some point

Valuations, however, are to be watched. The renewed growth in developed market central bank balance sheets has its counterpart in liquidity and broad money growth. With risk-free rates at or close to zero, it is unsurprising that the liquidity environment has propelled asset valuations to post-financial crisis highs. The S&P500 is currently trading on a 18x-19x multiple of consensus earnings for the year ahead. All developed equity markets re-rated during 2019 as recession fears got pushed back. However, this was not reflected in stronger earnings expectations. If confidence in earnings does not recover, current equity valuations may come under pressure.

The Q4 earnings season in the US came with mildly good news with a decent skew towards positive surprises, albeit on partial results at the time of writing. Still, investors will need to see confirmation that improved sentiment after the Phase 1 trade deal translates into better corporate performance.

According to US national accounts, profit trends in the US have not been that encouraging in recent years falling as a share of GDP to below 10% last year. S&P reported earnings to Q3 were flat to down following strong growth in 2017 and 2018. Any upturn is depending on cyclical indicators like the ISM index turning up. Sentiment and technical alone are not likely to sustain the current pace of return without confirmation that the fundamental picture is improving.

On the credit side spreads have continued to narrow since the start of the year. The “rates on hold and modest growth” fundamental picture is supportive for credit markets but further reductions in credit spreads from here will rely on technical and momentum. Credit spreads are more likely to stabilise close to current levels according to out fixed income team. Indeed, a more robust environment for equities would likely see rates higher and lower overall returns from credit markets. Our current expectation is that core government bond yields will rise during Q1, constraining bond performance. Short-duration credit strategies are preferred as a result with this approach focussed on income return.

Overall, we remain positive on markets given the very supportive monetary backdrop. We prefer equities to bonds and credit to rates. Increasingly, however, there will be a need for investors to consider whether further marginal gains can be achieved at what are likely to be even more stretched valuations.

Download the full slide deck of our December Investment Strategy

This document is for informational purposes only and does not constitute investment research or financial analysis relating to transactions in financial instruments as per MIF Directive (2014/65/EU), nor does it constitute on the part of AXA Investment Managers or its affiliated companies an offer to buy or sell any investments, products or services, and should not be considered as solicitation or investment, legal or tax advice, a recommendation for an investment strategy or a personalized recommendation to buy or sell securities.

It has been established on the basis of data, projections, forecasts, anticipations and hypothesis which are subjective. Its analysis and conclusions are the expression of an opinion, based on available data at a specific date. All information in this document is established on data made public by official providers of economic and market statistics. AXA Investment Managers disclaims any and all liability relating to a decision based on or for reliance on this document. All exhibits included in this document, unless stated otherwise, are as of the publication date of this document. Furthermore, due to the subjective nature of these opinions and analysis, these data, projections, forecasts, anticipations, hypothesis, etc. are not necessary used or followed by AXA IM’s portfolio management teams or its affiliates, who may act based on their own opinions. Any reproduction of this information, in whole or in part is, unless otherwise authorised by AXA IM, prohibited.

This document has been edited by AXA INVESTMENT MANAGERS SA, a company incorporated under the laws of France, having its registered office located at Tour Majunga, 6 place de la Pyramide, 92800 Puteaux, registered with the Nanterre Trade and Companies Register under number 393 051 826. In other jurisdictions, this document is issued by AXA Investment Managers SA’s affiliates in those countries.

In the UK, this document is intended exclusively for professional investors, as defined in Annex II to the Markets in Financial Instruments Directive 2014/65/EU (“MiFID”). Circulation must be restricted accordingly.